It used to be that wearing a shirt with the headline “Atheist” was considered to be the gold standard in testing public reception of the label. Most of us never wore such shirts and assumed that non-atheists would be confrontational or, at the least, expect the shirt-wearer to be confrontational. Living in the bible belt, I get it. Don’t expect to see me wearing such a shirt to a job interview. Still, Americans came close to having our first non-Christian candidate for President this year with Bernie Sanders. This suggests that at least half the population of the US is more receptive than ever. So I made shirts.

They aren’t as explicit as a shirt with the big block letters A-T-H-E-I-S-T. Think of them as part of a campaign. Each shirt displays a passage of the bible, not unlike a Christian wearing John 3:16 across their chest. The primary difference is that the passages available here are the parts of the bible Christians don’t advertise. They are about God commanding the murder of kids, approving the institution of slavery and keeping women down. They highlight why the bible is #notworthfollowing.


Let me know what you think. 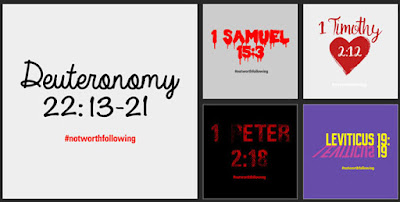