What The Hell Am I?

Do you believe in God? It should be a binary, yes or no answer. It is a very simple, yet very big question and the answer defines you in an important way. How you view the world and live your life is likely contingent on your answer.

But there’s a problem. I don’t know if it’s the shifting political correctness of our culture, or just opposing viewpoints projecting their beliefs onto others, but the question has become muddled. Let me help you answer once and for all, are you an atheist, theist, agnostic...what?

This handy question tree should allow even the most inept call centers to ascertain your position. It’s important to note that “Do you believe in God?” is an opinion question. Whether your answer is yes or no, you need not worry about showing your work. You are essentially guessing. Evidence and arguments built on sound reasoning could provide for an educated guess, but a guess none-the-less. People who have dwelled on the topic of theology all their life and those who have just been introduced to the concept of God have equal rights to their opinion. However, if you have no opinion at all, you are an apatheist. This means you don’t care about one of the biggest questions humanity has ever posed and likely live your life as an atheist by default. 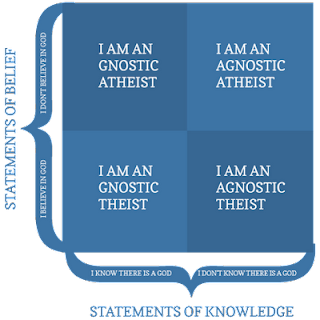 From your yes or no response, we come to a question of knowledge. Are you sure that God does or does not exist? Are you 100% positive? This is a hard position to defend no matter which side of the issue you’re on. Generally, theists claim gnostism because their belief system requires absolute faith for the eventual reward. It is my opinion that if you claim certain knowledge, you are mistaken. We are all agnostic, even if we are right, because the question of God as he is typically defined, is unknowable. 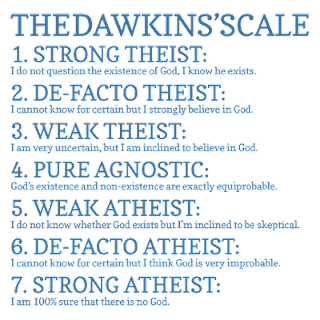 Famous agnostic atheist, Richard Dawkins, has his own scale of belief. 1 is a gnostic theist. 2 and 3 are different levels of agnostic theism. 5 and 6 are both agnostic atheists. 7 is the gnostic atheist. The new bit is number 4, the pure agnostic. This is someone who thinks it is just as likely that a higher power exists as not. I’m not sure how you come to such an exact conclusion, but I accept that some might be able to nail down their own belief better than I.

The final way to look at belief is a sliding scale of probability. There are few black and whites in the universe, so the possibility of a creator should allow for shades of grey as well. If you think that it is more than 50% likely that God is up there, you are a theist. Less? You’re an atheist. Exactly halfsies on the issue? That makes you the elusive pure agnostic. Measuring your belief isn’t an exact science, so we are guesstimating here.

Note: Each of these questions and scales may be applied to a vague concept of god or specific definitions of the deity such as Yahweh, Vishnu, Zeus...whoever. For instance, I’m 85% sure that there is no intelligent creator of the universe, but 99.9% sure that Zeus is imaginary. (I just can’t commit to that last 0.1%) While I don’t think one can be gnostic of the concept of god, you can be gnostic of specific Gods if you can prove or disprove their existence.

Some choose to not answer the question of belief for the vague concept of god. If this choice isn’t made out of apathy, they are likely ignostic--thinking a clearer definition is necessary to confess belief.
Posted by Grundy at 9:02 AM