An Interview with the Naked Pastor 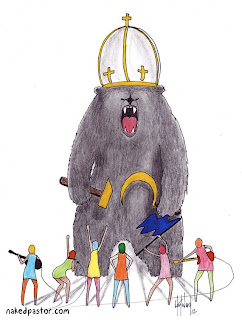 The following is an interview with David Hayward, the NakedPastor.

A cartoon is worth a 1000 words in my book. What inspired you to sketch your thoughts on religion to accompany your words? Did you use such visuals as a Christian as well?

First of all, it is interesting to me that you suggest I was a Christian in the past. I was, but I don't deny being a Christian today. The way I explain it is that I am a Christian in kind of the same way I am a Canadian. Christianity is such a part of my DNA, in a sense. I feel no compulsion to reject it or separate myself from it. At the same time I feel no compulsion to reject or separate myself from Atheism. It is very much a part of who I am as well. I realize my inability to be labeled frustrates many people, but this is just who I am.

I agree about the power of pictures. I can't remember not drawing. But I didn't start cartooning until 2006. I love the ability of some cartoonists and artists to convey so much content, so much truth, in a simple drawing. So in 2006 I challenged myself to draw a cartoon every day for as long as I could. I thought I would last a few months. Here it is exactly 6 years later and I'm still going.

Obviously I draw a lot. So not all of them are good. In fact, maybe there's just a few I think are really good. But I keep it up, hoping to hit the nail on the head one day.

Interesting though about my cartoons. I used to just write on my blog and maybe show some of my paintings. It was when I started cartooning that people started to notice what I was saying, including the church and the denomination I was a part of. My words were basically ignored. But my cartoons couldn't be, for some reason. I think it was mostly my cartoons, as well as the development of my "z-theory", that got me in trouble. Cartoons such as my "Personal Walk With Jesus Over the Years" stirred up enough controversy.

Z-Theory is a concept that you wrote about during your transition away from religious faith. Can you briefly explain it here? Has your view of Z-Theory changed since you first came up with it?

The "z-theory" is very important to me. If you click on this link, it will lead you to most of my posts on it. I'll try to explain it in a nutshell.

For almost my whole life I struggled over how Christianity, along with most other religions, lay claim to the entire truth and that its population is the holy chosen people of God. Even though I identified myself as a Christian, I couldn't make sense of all the other religions in the world, as well as all the good people outside the faith. I studied hard. I researched other religions and spiritualities. I studied various interpretations of Christianity and the bible. No peace came.

Then one night a few years ago I had a dream of a waterfall. I am standing at the bottom looking up. I obviously can't see over the rim, but it's obvious there are an infinite amount of gallons pouring over it. There is an unseeable source, infinite, endless, never-ending. But I can't see it. Then the water pouring over and down is immeasurable… the proof that there is something like an infinite Source above the rim. Then when the waterfall hits the earth, it spreads everywhere, covering everything and connecting everything in its path. I immediately saw this as a picture of reality. When I awakened, I felt an incredible peace come to my tormented mind. This peace has stayed with me ever since. My theological and philosophical anxiety ceased.

I see this image as a picture of reality, of what is, and all ideas are represented in it. So, theologically for instance, I saw it as Trinitarian… that the Infinite Source beyond the rim is God, that the waterfalls is the Incarnation, the appearance or manifesting of the Infinite Source, represented by the story of Christ, and the spreading of the water across the earth is the Spirit connecting and covering all things. Of course, this can also be applied to, say, science. Above the rim is what we don't know yet, what has not yet been discovered. But we know something is there because we are making new discoveries every day. The Unknown makes itself known, is "revealed" to us so to speak, represented by the waterfall. It is our discovery of the unknown, the mystery, the problem. Then the application of our discoveries is  like the river that spreads out over the earth for the benefit, hopefully, of the human race and the earth.

Anyway, this is a thumbnail of what I saw and what brought things together in my mind. It provided an integration of various thoughts and problems into a simple picture. This is the z-theory basically. I've been invited to write a book and I've begun working on it. I do wish to articulate it more fully and carefully because I think it will help others looking for a unifying kind of theory of Reality.

From within the church, did you encounter other preachers who were vocal about their own doubts? If they were not vocal, did it seem to you like they questioned aspects of their own religion or would you say they were “true believers”?

Actually, it was extremely rare for me to meet other questioning ministers. Very few, if any, express their doubts because they know the incredible risks involved, including losing their jobs. I know some who silently questioned, but I don't remember of any who did so publicly. Many pastors I knew and know are true believers, as I once was.

But it must be understood that there are many pastors, ministers, priests, rabbis and Imams who have their doubts. To be vocal about these is extremely risky and dangerous. They know this, which is why many of them suffer in silence. It's a horrible predicament. I know because I was there. When I finally came out with my questions and doubts, etc., on nakedpastor.com, that slowly began the process of me eventually leaving the ministry and finally the church.

You’ve mentioned on your site that the combination of the your reputation and small town living has caused some discomfort in past church appearances. Overall, how are you treated by Christians as an “out” atheist and ex-pastor?

Again, it's interesting that you call me an "out" atheist. Some would say I'm an atheist. Some would say I'm a Christian. I would identify myself as a Christian in the broad sense. But I would also identify myself as a non-deist or non-theist. I guess I resist labels of any kind because I don't comfortably fit into any one category. I am, like many people, very complex in what I think is true. I think truth is very complex and mysterious and defies pigeon-holing. We can claim allegiance to this school or that party or denomination or religion today. But what will we be tomorrow?

Living in a small city with a somewhat tarnished reputation as a pastor and a Christian has made things difficult in some ways because people want to know exactly where you stand. I get asked, "Do you still believe in God?", which I find impossible to answer. Or "Why did you become an atheist?" That question is just as perplexing. "God" and "atheist" are so weighted down with tons of baggage that if I said yes or no, all that baggage comes pouring in and informs people of what they believe about you no matter how differently you might believe.

As an ex-pastor, I think for many it is a symbol of failure. It means I gave up. It means I rejected the church and God. I feel no compulsion to correct people about that because they'll believe what they want. I feel no shame at all and have given up worrying about what people think. I'm searching hard for what's true, and life is too short to keep worrying about making other people comfortable and secure in their beliefs.

What changes to the dialogue have you noticed since your audience transitioned from your congregation to the on-line atheist community?

That's an interesting question because my readership has definitely changed. There is a whole movement within Christianity and the church that things need to be changed. So people are in the busy business of tweaking this or that. It is a matter of style. I'm talking not just about praxis, but also theology. But for me it is beyond tweaking. In my opinion, religion has proved bankrupt. A lot of theology being put out today is face-lifting the same old wrinkles. It's worthless. And people are beginning to recognize this. I have continuously encouraged doubting and asking questions. So my readership seems to be more and more people who are daring to ask the questions, including agnostics and atheists. My cartoons are frequently shared by atheist websites. I appreciate that and love being involved in all these conversations.

6. Who is your favorite cartoonist?

Well, let me tell you who first inspired me to start cartooning, and that is Hugh MacLeod of gapingvoid.com. Years ago I came across his material that he was posting every day, so I decided to challenge myself to draw a cartoon every day like him. I had no idea I would still be doing it 6 years later.

But recently I came across another cartoonist who I think is amazing in his simplicity, and that is the Romanian cartoonist, Dan Perjovschi. You can see some of his stuff here. He can convey so much in one simple black marker picture. That's been my goal for years now: to say it all in one frame. Kapow!!

7. Who is your favorite atheist activist?

Hm. My favorite atheist I suppose would be Hemant Mehta, the Friendly Atheist. But I'm not sure he would be considered an activist. But my favorite atheist author and speaker who can really articulate the problems in an engaging, intelligent and even entertaining way is the Slovenian philosopher Slavoj Žižek.
Posted by Grundy at 8:00 AM