An Interview with Laughing in Purgatory

The following is an interview with Laughing in Purgatory.

You use humor to comment on the absurdities of religion. What makes faith such a good target for parody?

Faith is a great target for comedy for a variety of reasons. First, there seems to be a negative correlation between how religious a person is and their sense of humor. As religiosity rises their ability to laugh decreases dramatically. I don’t know of any scientific studies of this phenomena, but anecdotally speaking I’ve never seen a picture of Osama bin Laden smiling. I’ve seen Pat Robertson laugh and it is eerie, it’s as if the man needed extensive training to summon a giggle.

Second, look at the material of the faithful. Any ten year old who has not been indoctrinated into faith-based lunacy would recognize any holy book as fiction. Talking snakes, people rising from the dead and angels are in the same category of Santa Claus, the Easter Bunny and the Great Pumpkin. Being with religiously minded people is like watching an episode of SpongeBob SquarePants, and you’re the only one who knows it’s make believe.

Third, there is the tragic aspect of faith that is ripe for dark comedy and satire – which I love to write. In many ways the funny is a cheap ego defense to deal with a species with a history of killing and torturing in the name of their god’s perfect love.  In my opinion, you can ignore that harsh reality, go mad or laugh. I choose to laugh.

Mocking a hot button issue like religion is bound to offend a great many people. What do you say to someone who claims to be offended by your satirical point of view?

I use self deprecating humor all the time, and that diffuses a lot of tension. It’s very difficult to get really peeved at me while I’m honestly trying to get you to laugh while acknowledging that I am as big a fool as they come. 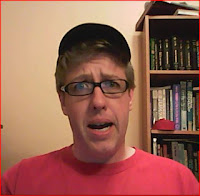 As an atheist parent, how do you teach your children about religion? Were you brought up religious and does that inform your parenting today?

Here is what I tell my kids: God is an imaginary friend many people have. The thing is they do not realize that he is imaginary. Do not tell them God isn’t real, because they may get really angry at you. Now, that runs counter to what many atheist parents do in terms belief. Many parents think that they should just let their kids figure it out on their own. That they need to be agnostic about God and give their children the cognitive tools and all will be good in the world.

We talk about religion quite a bit around the kitchen table. We also talk about Greek and Norse myths as well as science, geography, comic books, etc. That’s because I spend time with my children and we have real conversations. If a parent spends time with their kids then religion will come up. Seeing that atheists are well acquainted with faith, they should be able to transmit what they know to the next generation. What is absurd is when atheist parents bring their kids to church in order to educate them about faith. That’s like going to a used car salesman to learn about the science and history of the automobile.

I was brought up in a Baptist (the non-Southern variety) home. My mother was the church organist and my father was a deacon. My early upbringing was very church intensive, and I wanted to be a minister for a while.

Your newest feature to Laughing in Purgatory is called "The Rogue' Gallery" which highlights the lowest common commenter. How do you recommend other bloggers deal with true-believers and the occasional troll?

The Rogues’ Gallery is an experiment, and one that has actually born some fruit. I burned The God Delusion last February in response to rioting Muslims who were miffed at the Qur’an being mishandled.  I made a few memes stressing the point that atheists don’t go batshit crazy when something we like gets desecrated. One of the memes was picked up on a Humanist site and a commenter stated that, “Those who burn books deserve death. Period.”  I placed that fellow into the Gallery and shortly afterwards received an email from him apologizing for being a jerk. And it was a real apology, too. While I kept the incident up on the page, I removed his name as well as the meme I made with his face and the quote. It was a happy ending for all.

In dealing with trolls in general, I moderate my comments.  If a Christian is polite and has a real question I’ll answer it. If a lunatic leaves a preposterous but entertaining comment I’ll post it just so others can read it and have a good laugh. However, I can do these things because I run a relatively small blog. If Laughing in Purgatory ever gets big I plan to go the Sam Harris route and get rid of comments altogether. What I know for sure is that I can only handle so many “Is this story real or a Poe?” comments before my eyes start bleeding.

Christopher Hitchens by far. The man had a savage wit and a proclivity of irritating everyone.

Woody Allen. My favorite movie is Crimes and Misdemeanors. The film has a mix of the tragic and the humorous which I love. Allen has the ability of framing the “big questions” in an easy to understand way that makes the audience think as well as smile.

What do you see as the most harmful aspect of religion?

Religion separates the adherent from reality. When a person chooses not to reality test their beliefs then all types of deviltry occurs. Creationism, anti-gay bigotry and the vilest tribalism is the result of people putting faith-based cognitive blinders on.

If you could incorporate any aspect of religion into your life or the life of others without the mythology, what would it be and why?

I’m a bit of an architecture fan and I wouldn’t mind living in a renovated church someday. I keep praying that more churches go bankrupt.