The last god I believed in was the version of Jesus seen through the eyes of Mary Baker Eddy, an American women who attributed overcoming health issues to faith healing after homeopathic “medicine” failed her. The religion she founded, called Christian Science, framed sin and sickness as errors of thought and framed thought as an expression of Mind, Soul, or Spirit--all of which she considered synonyms for God. Jesus was considered the first and ultimate Christian Science practitioner, a skill and awareness he passed on to his disciples, who also healed the sick in the Bible. The healings eventually became less common as the teachings of Christ were muddled over time. Luckily, Ms. Eddy got us all back on track...or so the CS narrative goes.

I bring all this up because I’ve been thinking about the catalyst of my journey to atheism. Was there one event that made me turn the corner from believer to nonbeliever? The answer for me is the same as most of us, no. A series of many events progressively inspired me drop my faith. That said, I remember one place, in particular, where my doubt reached a tipping point.

I was 16 years old at the then biggest (only?) Christian Science summer camp. The camp had a CS practitioner on staff. If you think of God as faith healing medicine, a CS practitioner is basically a faith healing doctor--prescribing God. Ideally, a Christian Scientist can learn to be their own faith healing doctor or a practitioner for others, but if one isn’t comfortable in receiving the spirit or working out their own problems, guys like the one at camp are there to help. Interestingly, the camp also had a nurse. Not a faith healing nurse, a nurse nurse. Apparently CS magic is great for healing invisible ailments of subjective pain, but isn’t trusted to reset a broken arm when there is a possibility of a less-than-faithful parent suing the camp.

This is problematic because Christian Science Sunday School taught me that this faith is unique among all others in that they are evidence-based. One can prove the efficacy of the Christian Science process by it’s ability to heal, but if prayer works consistently, why the safety net? The presence of the nurse weighed on me. When, during the various physical activities common to most summer camps, I injured myself. I tested my ability to faith heal in earnest. I fucking hurt so I fucking prayed. This wasn’t the first time I attempted to heal myself. At home, I got rid of a few headaches, or so I thought, and failed to get rid of a few others. My immune system and confirmation bias convinced me the system worked. There, at camp, when the pain didn’t subside, I doubted. I thought back to all those other “healings” and wondered if my success rate was any higher than chance. If the length my headaches naturally lasted was, well, just how long they lasted--regardless of me asking JC for an assist.

I stayed at camp and continued making friends and eating granola, but I took in the remainder of the Christian Science material through a new found skeptical filter. When I got home, I kept going to Sunday School more for the cute girl in my class than for any spiritual insight. The questions compounded until I learned to value the evidence-based belief my church professed, and decided that they weren’t the ones able to provide it.
Posted by Grundy at 6:30 AM 11 comments: 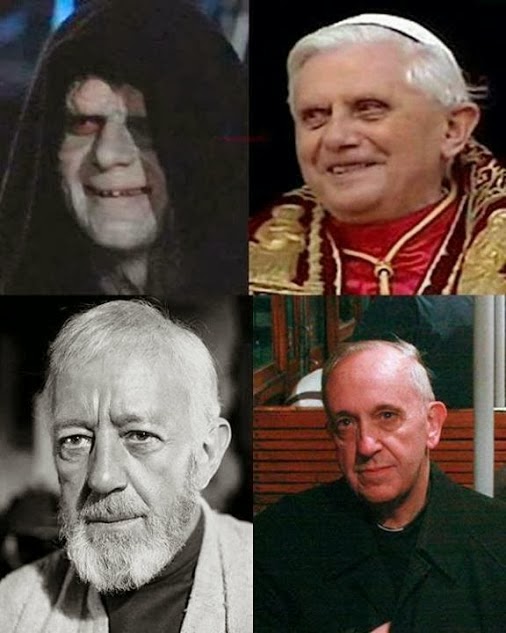 If I believed the Force was real as completely as theists say they believe their religion is real. I'd be out staring at rocks all fricking day thinking "Go up! Fly! Levitate dammit!" I'd be reading the grocery lists of Jedis--anything to get a handle on this power. Hell, if it didn't work out after a couple years of daily training, I'd even give the Sith a shot.

Christians claim to have complete faith in the word of God, but generally don't even spend the time to learn the original languages in which the Bible was written. They read translations of translations, sure (or more commonly listen to someone else's interpretation once a week), but I don't find that convincing. Maybe they aren't so convinced. Maybe we aren't so different.

I was a Christian Scientist, a denomination that taught God's power and influence was more attainable then the average flavor of Christianity. If I lived by the values of Jesus I could, with complete faith, do as Christ did with God working through me. The analogue to Star Wars is very appropriate. Live like a Jedi and when you truly believe you can lift a rock with your mind, it will happen. JC's disciples were the Jedi of the Bible, healing folks long after the ascension.

I tried healing myself and others as a Christian Scientist. Surprise, surprise, it didn't work. The theological out for my failure was that I didn't have enough faith that it would work. I agreed there. More than that, I knew I was fundamentally incapable of complete faith in what I found unbelievable. So I embraced my disbelief and here I am.

Sometimes I think the vast majority of theists, if not all, are also incapable of complete faith in their supernatural stories. I would think an underlying skepticism in that which is contrary to experience is a feature of human nature. Surely there is selective pressure for it, evolutionarily speaking. The question is, how to get them to embrace their disbelief and move on?

Or maybe they just need to believe a little harder and start levitating rocks. ;-)
Posted by Grundy at 12:18 PM 7 comments:

In the beginning, I was agnostic. Some say we are born atheist, but I don’t believe it. Belief is a choice. Disbelief is a choice. As an infant with no concept of God, my choice was to crap my diaper. It was all downhill from there.

I was baptized Catholic in the traditions of my Irish father. Living in an undesirable school district in the slums of Pompano Beach, Florida, my parents opted for a Catholic school. Church services woven into my class schedule was a mixed bag for a boy who was a fan or neither praying nor learning. I remember uniforms, pews, and children who weren’t any more moral then the kids in the ‘hood. I survived Catholicism with only a dusting of indoctrination.

Indoctrination is a bad word in the atheist community. It’s simplest definition is gaining answers without asking questions. Most of my answers came in the form of Christian Science, a little known flavor of Christianity often confused with Scientology. Christian Science was founded by Mary Baker Eddy, a woman who fell, injured her spine, and claimed she was healed by God. She then wrote a Bible companion called Science and Heath with Key to the Scriptures for the basis of her new religion.

Christian Science practitioners heal people like Jesus healed people. Eddy believed everyone had the faith in them to carry out the miracles of Jesus to heal, cast out demons, and (as a theoretical goal that was never quite reached) raise the dead. It isn’t simply mind over matter, it’s capital “M” Mind over matter. God is channeled through prayer to cure what ails ya. I could go on about how sickness is caused by errors in thinking rather than germs, but it just starts to get depressing. I believed this crap after all.

I stuck with Christian Science for as long as I did because church was an interactive atmosphere with people I very much liked. Church wasn’t really church. Sunday School lasts until 18 years of age in CS and seemed more of a discussion than a lecture. I could have asked the hard hitting theological questions, but they didn’t occur to me at the time. That’s the problem with indoctrination. It’s hard to realize a counterpoint when all you’ve ever heard is point.

I value my base in faith because it allows me to understand the perspective of the true believer. To consider an alternative viewpoint after being essentially brainwashed is unthinkable. You don’t get brainwashed strapped down to a chair with your eyelids peeled back as the propaganda plays, you get brainwashed talking amongst friends, rehashing the same topic in the same ways without any honest analysis.

During my tenure as a Christian Scientist, I got hurt. Lots. I prayed for God’s help...and it never really came. I was expected to accept a passing headache as a divine gift. I went to Wednesday night testimonials and the miracles sounded more and more like coincidence. I learned about the placebo effect. I learned about germ theory. I found out that Mary Baker Eddy was a bit of a hypochondriac in her younger days and that she filed a law suit for her injury after being "healed." I discovered the skeptical movement and became a critical thinker. I dismissed everything from cryptozoology to pareidolia to homeopathy. I learned that most of Mrs. Eddy’s doctors were homeopaths. Then I finally did what Christian Science taught me to, I fixed the errors in my thinking. I just had to drop the “Christian” to do it.

Thanks for reading. It feels good to share my atheism in a more personal story. My critical thinking genesis, if you will. This has been cross-posted to the Reason Being Blog as part of their "Road to Atheism" series. I encourage you to commit your journey to text as well. It's cheaper than a shrink.
Posted by Grundy at 11:41 AM 4 comments: