Without God, does morality mean whatever we want?

A favorite claim among Christian apologists is that, without God, morality can mean whatever we want. That’s what happens when good and evil is not grounded by a divine standard. All we have are individuals with personal preferences judging others with preferences that may well be very different. As best, an individual or group can only impose their rules and judgements on others with a show of force, often referred to as “might makes right.” Those human rules and judgements can not be said to have inherent validity. While I’d love to rebut this claim entirely I can not do that any more than I can grant them that they are fully correct. Language and ethics are very complicated and both are at play here.

At the most literal level, yes, moral terms like good, evil, right, and wrong can mean whatever we want. Why? Because moral terms aren’t special. Any word can mean whatever we want. This should go without saying, but languages are invented and maintained by the population of speakers. If enough speakers evolve English so that evil means good, that is how it shall be moving forward. A single speaker redefining words will find himself unable to effectively communicate with everyone who hasn't adopted his fringe definition. That's why the meanings of good and evil tend to remain roughly the same within cultures, secular or religious. It’s hard to get everyone on board for an arbitrary remapping of terms.

The secular definition of moral good is essentially to behave in a way that is beneficial to others. Regardless of the letters written or sounds made to communicate this concept, it would not change it’s value. In other words, if “good” is renamed “evil” tomorrow, that would just mean that we would start to value “evil” over “good.” Now the question is: do we value the concept we call good because a divine third party made us? There’s no way to know, but we do know that there are reasons for social beings to value the concept we call good independent of supernatural mandates.


There are many more reasons to be good rather than evil, but evildoers still exist. Apologists argue that people who do wrong do so because they separate themselves from God or ignore that divine moral compass within them. Some even say that it’s an acceptance of moral relativism that swings open the door to sin. While it is always wrong for the slave to strike an owner, it may be right (in the owner’s mind) for the owner to strike a slave. The rapist isn’t wrong to rape because (in the rapist’s mind) what’s right and wrong are up to whatever we want and, the rapist wants to rape. While there are individual defectors who periodically discard their value of good to serve base desires, they are rarer exceptions. More common are those who maintain their value of good with a more narrow view of equality. The slave owner treats other whites as peers with the same understanding of good as you or I, but define blacks as a class in which the definition does not apply. The same could go for the rapist and how he sees women. It may not be the definition of good that’s a moving target, it could be the definition of human.

There is more to the secular meanings of good and evil after we take into account context, motives, consent, ect. What’s most important to the point is that every culture has a name for this concept and places a high value on it. Apologists who admit this attribute it to the aforementioned God-given moral compass within us. I’ll stick with the alternative that all humans share something else, a desire to not be alone. Don’t underestimate how lonely, and short, one’s life would be if they placed no value on being good.
Posted by Grundy at 12:01 PM 1 comment: 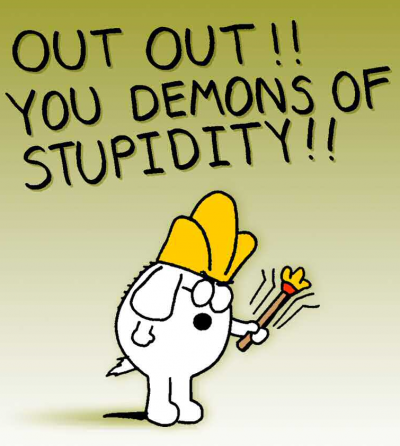 Religious apologists often confuse the word objective with words like absolute, transcendent, and universal--especially when talking about morality. To illustrate what objective means, I will now insult these people.

They are stupid...at least in the subjective sense, which is a judgement I'm making influenced by personal feelings and opinions. However, in the recent past, I could test these people and state objectively that they are morons, imbeciles and idiots--each of these labels corresponding with an IQ score of 51–70, 21–50, and IQ of 0–20 respectively. A metric, like an IQ score, means that feelings and opinions can't factor in. Your IQ is your IQ regardless of what I personally think of you, and therefore objective.﻿
Posted by Grundy at 4:20 PM 5 comments:

Morality and the Definition Divide

Search “morality” in Merriam-Webster and the first definition you’ll see is “beliefs about what is right behavior and what is wrong behavior.” That’s beliefs, plural. This implies that what I believe is right and wrong isn’t the only belief out there, which should be obvious. Add the word “objective” in front of a word with a definition like this and the result is an oxymoron. Morality, by definition, is subjective. Case closed.

Well, of course the case isn’t closed. I can’t cite Merriam-Webster and expect millennia of philosophy to buckle.  Honestly, it isn’t even justified. Merriam-Webster has four definitions for the word “morality,” and MW is hardly the only dictionary in circulation. Should I go with the terminology of Google? Wikipedia? Who is the linguistic authority here?

Few theists will deny the reality that different beliefs of right and wrong behavior exist, they just believe one in particular belief is true in an absolute and objective way, conveniently, it’s their own. Digging deeper we need argument on more definitions. What does right mean? What does wrong mean? According to the first entry of Merriam-Webster, right behavior is that which is morally or socially correct or acceptable. Apologists reject any definitions of right and wrong in terms of what is acceptable because those definitions are subjective. They say, “what if people find rape acceptable, then is rape right by this definition?” That is true, by this definition. Finding it distasteful doesn’t strike it from the vernacular. If it did, we likely wouldn’t have a word for “rape” to begin with. Still, they want another definition. Lucky for them, there are 15 other definitions in MW alone, some of which tell us little. Right behavior is defined as what is moral, what is moral is defined as good behavior, and good behavior is defined as right behavior. Thanks. Zero help.

Apologists also don’t like definitions that are relative. This means defining right behavior as that which benefits others or causes no harm is a no go. They don’t see morality as a social contract, they think it exits independent of those capable of moral choices. In other words, rape was wrong in some transcendent way even before living creatures existed to rape or be raped. Where does that leave us?

It leaves the majority of us using relative and/or subjective definitions while apologists demand words with meanings that are absolute and objective. Words like...okay there are no words like that. Language is a human invention that at some point paired concepts with arbitrary strings of letters. I’ve spent the last couple weeks trying to understand how apologists arbitrarily paired their words.

I tried asking apologists to define “right” behavior. They did their best not to, but when pushed I received the following responses.


There is something interesting about each of these apologetic definitions.  “Ought” implies obligation. Ought to according to whom? The answer is, of course, God. The second answer explicitly mentions God as part of the definition. It’s clear from this that many religious apologists frame their understanding of morality with God as a fundamental prerequisite. Given this understanding, they are completely correct to say morality requires God, but not by logic or deduction, rather by definition. The perceived validity of the moral argument for God then is a product of indoctrination. Any outsider with a secular understanding of the terms, should see the moral argument for God as entirely circular. The conclusion, that God is required for morality, is assumed from the start.
Posted by Grundy at 7:00 AM 6 comments: