The Cause of the Big Bang 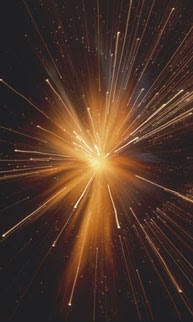 At it’s heart, the cosmological argument for God says that anything that begins to exist must have a cause. Used in conjunction with the Big Bang Theory, apologists can rightly argue that our universe at least seems to have a point of origin and therefore a cause. As an atheist, I reject a supernatural creator that did not begin to exist...so, what caused the Big Bang? Well, I don’t know (which is a valid response.) I only know of scientifically informed options.

Quantum foam. I can’t explain this better than Lawrence Krauss so I prefer that you come back after reading the book A Universe from Nothing or after watching a relevant lecture. The best layman explanation I can provide is that “nothing” (the absence of conventional matter, energy, space & time) is an unstable state and quantum fluctuations will give rise to something--even the singularity that became our universe.

Self-Causation. Violated causality is a logic no-no, however, it is a valid interpretation of quantum mechanics. If A can cause B which can cause A--then the first instants of the universe, while it was still at the quantum scale, could be it’s own catalyst. It’s counter-intuitive, but that’s the name of the quantum game and why we shouldn’t assume we know how things work at the literal dawn of time.

Result of a Collapsing Star on a Higher Dimension. I'll be honest, astrophysics is even less my area than quantum mechanics. Read this.

Big Bang/Big Crunch Cycle. It’s the idea that the universe expands then contracts back into a singularity which expands into a new universe. The cycle is an older hypothesis that is now less likely than once thought.

The universe is essentially eternal and therefore causeless. Yes, there is a point of origin, but I’m not so sure we can regard the movement of time at it’s birth to our standards. For instance, if time moved exponentially slower the closer to it’s point of origin, the 13.8 billion years we think the universe has been around is only correct judging time from our perspective. In fact, it’s essentially eternal.

Magic. Theists draw upon the supernatural in support of their preferred god all the time, so I can just as easily suppose the supernatural as an option that abolishes the need for a god. I firmly believe there is a natural process that resulted in our universe, but even if there isn't, that doesn’t rule out that the supernatural process involved is unguided and spontaneous. Any argument against this can be dismissed with one word: magic.

*Events that precede space and time are nonsensical to our experience. Some of the above options require both a time-like dimension and a space-like dimension independent of our universe, but then so would an eternal deity.

**If you understand the latest in quantum mechanics or cosmology or theoretical physics, please comment with citations. I’ll gladly update this post with more accurate information.
Posted by Grundy at 6:00 AM